Kitengela is well known for having the best nyama choma in town, so much so that people usually come from far and wide by car to come and taste this juicy delight. Hence the reason why the city is generally congested on weekends to the chagrin of the locals.

Another distinction is that it is the fastest growing city in the country and looking around it is easy to see why with the different constructions going on. We would be forgiven for thinking that we are in the midst of a construction boom when in other parts of the country things are slowing down. This is because a good number of Nairobi’s middle class and a few bigwigs have decided to make Kite their home. The main selling point being the proximity to the city as well as affordable land prices.

In summary, there is money to be made in Kitengela as long as you are willing and able to offer what the people want. Hence the reason why almost all the big banks and MFIs have pitched their tent here. For a very long time, there were no real meeting places in the city. What we had were rumba joints which are okay and not everyone’s cup of tea as we are clearly not the target audience. As such, residents either had to hang out in town or travel to Syokimau, both located a good distance away. This was the norm until the police started setting up roadblocks to arrest those who were driving drunk.

The fact that the majority of the residents were relatively young meant that there were those who were willing to risk getting caught just for hanging out, which was obviously risky. Towards the end of last year, salvation came for this group of people in the form of a new club named “Halcyon”. Finally, we had a place where we could go to drown our sorrows after a long week of scrambling in Nairobbery !!! In no time the place was packed, it was obvious that people were craving a place where they could relax and have fun close to home.

Soon after, another club called Pavillion opened, rumored to be owned by the guy who operated Space Lounge. The thing about Pavillion is that it might not be all there is to structure, but the Djs out there have some fiery mixes. Soon it became the talk of the town and people started flocking to it.

With choices also comes competition, the sudden influx of what some would consider premium clubs has meant other clubs in the area have lost their customers. This meant they had to either innovate or die. In fact, a couple has since closed because the majority of their customers just weren’t loyal !!

It was this innovation that enabled the 034 Club to purchase an old plane from Kenya Airways which should be transformed into a VIP section. Like a tweep joked, customers are guaranteed to get high !! Given the buzz he has created on social media, it’s clear the owner made the right bet as many will be there once we’re done with Covid and the curfew in Parte after Parte. . Needless to say, the bar has been raised when it comes to clubs in our dusty town and I can’t wait to see what other clubs have up their sleeves.

Interior part of the plane with the seats removed 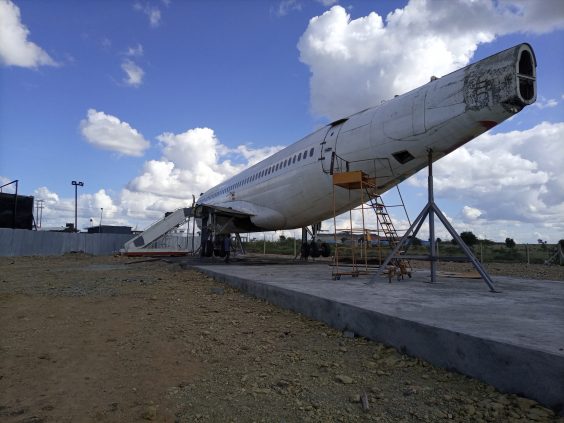 The exterior of the aircraft is currently repainted